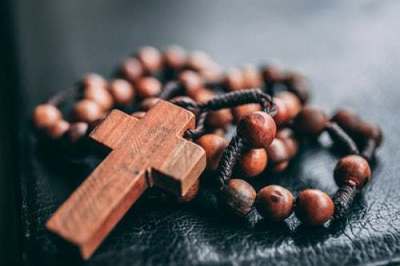 I thank God for the wonderful work that many ministries are doing to promote revival from D.C. to Pasadena—I wish there were more, but there is also a very troubling trend in the evangelical church as a whole. My goal in releasing this is for charismatic leaders to really rethink their position on this issue.

We are encouraged to be at peace with all men, even with those who have different beliefs. But the Bible also encourages us to boldly and confidently present a scriptural basis for truth and compare differences—to be peacemakers but not religious negotiators. In our zeal to reach the masses, we often compromise the message and quench the Spirit.

I love Roman Catholics and I believe that there are many Christians within their ranks, but, because of major theological issues, I don’t believe that we can share the stage at worship events. Read more below and don’t miss the brief audio interview here.

Most are unaware that Roman Catholicism promotes submission to the teachings of the Pope, bishops, and sacred traditions that often supersede Scripture. Traditionally, followers are not encouraged to read the Bible but to lean on Papal interpretation. The title, “Vicar of Christ,” implies that the Pope has the same power and authority that Christ has over the church.

Roman Catholicism also teaches that Mary was free of sin. Many believe that she is a co-redeemer to assist in redemption. A bumper sticker reads, “Can’t find Jesus, look for His mother.” Although some Catholics may not believe this, Roman Catholicism teaches it. Simply read Pope Pius IX Ineffabilis Deus written in 1854. On Catholic.com, they wrote that “within the New Testament Mary’s cooperation with God is ongoing. As she conceived Jesus, Mary began to cooperate with the work of Redemption (Luke 1:38).” And concludes a few sentences later that “She persists in this role as our Mother in heaven today (Rev. 12:17).” There is zero scriptural basis for these statements.

Instead of teaching believers to rest in Christ by faith alone, Catholic leaders often promote Mary worship and works to “merit grace.” Catholics remain dependent on the “Church,” even after death, to relieve suffering in Purgatory. Although sins are forgiven periodically in confession, the punishment still remains. When Christ said, “It is finished” He meant it. Purgatory is not only unbiblical, it mocks Christ’s finished work on the cross.

How can we be united when we are divided on fundamental truths? Again, I love Catholics priests and appreciate their desire for peace—I could have lunch with them and work with them on issues such as abortion, but when it comes to a worship conference and elevating them, I believe that we are sending the wrong message. Deep repentance needs to take place. Protestants need to repent from seeking the approval of man and our Hollywood approach to Revival—the more the merrier is not biblical. In our pursuit to “relate to others” and to “reach people where they are” in our postmodern culture, we run the risk of serving two masters.

Roman Catholicism needs to point people back to the preeminence of Christ and to the final authority of scripture. Christ is the only Head of the Church. We do not need an additional mediator or priest; Jesus is our mediator and Priest (Hebrews 4:15). We do not need to belong to any Church, or Society, to be saved. Salvation comes through Christ alone: “For by grace you have been saved through faith, and that not of yourselves; it is the gift of God” (Ephesians 2:8).

We need to seek God for Revival, not an ecumenical movement. We need God to speak, not the Pope. As important as unity is, repentance is the key—get the heart right and everything else will fall into place.

We can stand before God someday because our sin debt is paid in full . . . no intercessors, mediators, penance, or works can add to Christ’s finished work on the Cross. Romans 10:9 states, “If you confess with your mouth the Lord Jesus and believe in your heart that God has raised Him from the dead, you will be saved” (Romans 10:9).

“For by grace are ye saved through faith; and that not of yourselves: it is the gift of God: Not of works, lest any man should boast.” — Ephesians 2:8-9