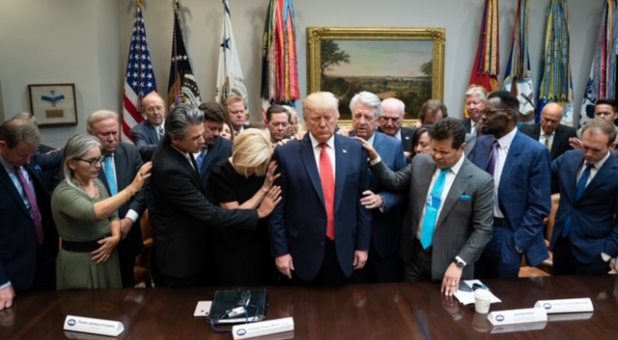 A group of pastors and faith leaders had an exclusive meeting with President Donald Trump at the White House Tuesday, Oct. 29. During that meeting, President Trump reportedly asked the pastors to lay hands on him and pray.

Soon afterward, several of those leaders posted photos of the meeting and prayer. Some praised the president’s pro-family and pro-biblical values while others offered prayer against what they see as unjust impeachment hearings.

Jentezen Franklin, senior pastor of Free Chapel, wrote on Instagram: “There’s nothing prayer and fasting cannot change. We are called to pray for our leaders and give Godly council [sic] when asked. I can say truly, that is happening. Will you join me and fast and pray for our nations leaders? “The heart of the king is in the hand of the Lord.” Proverbs 21:1.”

Paula White Cain, who was just officially added to the White House staff, called it “an honor to be @whitehouse on Tuesday to pray for @realdonaldtrump and our nation!”

She says they were able to discuss the “many great accomplishments” of Trump’s leadership.

“He continues to work tirelessly on behalf of the American people,” she wrote. “I call all believers to pray as the Word tells us .. ‘if my people who are called by my name humble themselves, and pray and seek my face and turn from their wicked ways, then I will hear from heaven and will forgive their sin and heal their land’ 2 Chronicles 7:14
(Official White House Photo by Joyce Boghosian) #prayer #potus #nation #blessed #God #USA #WH“

Dr. James Dobson and his wife, Shirley, posted photos of their time at the White House, saying, “We spent about 45 minutes in the Roosevelt Room in the White House on Tuesday. There were about 20 religious leaders there. It was a fascinating experience. The President was in fine form. We gathered around him and prayed for him. Here are a few pictures.”

Dr. James and Shirley Dobson spent Tuesday afternoon at The White House meeting with and praying for President Donald J. Trump. Here are a few pictures.

“It was my honor to meet with @realdonaldtrump and other Christian leaders at the White House last Tuesday. This White House is very open to the input of what Christians are concerned with and we were forthcoming in meetings with staffers. It was our privilege to pray for the President at the end of our meeting, which he welcomed. To those who would be critical, I would say I would gladly pray for any elected official, regardless of what party they represented. (2 Tim. 2:2) Let’s all pray for our leaders and our nation!”

“What a privilege to have been at the White House this week praying for our president and our beautiful nation! The word of God says to pray for those in eminence in 1 Timothy 2:1-2. Let’s continue to pray for @realdonaldtrump and our nation!”

Ralph Reed Jr., chairman of the Faith and Freedom Coalition, tweeted: “On Tuesday, I joined other leaders of faith to pray over Pres. @realDonaldTrump. The president has been treated horribly, but despite this, he has remained focused and in command.”

Pastor Jack Graham of Prestonwood Baptist Church offered a critique to the impeachment hearings against Trump, calling them “manipulative and bogus”:

“Praying for @realDonaldTrump and glad to see Sen. Lindsey Graham’s resolution in opposition to the unjust and secretive impeachment hearings led by partisan politicians. This manipulative and bogus “investigation” is bad for our country and should be stopped. Enough is enough.”

“Glad to visit with @realDonaldTrump to discuss how this administration is advancing conservative policies. It is clear to me the impeachment is less about the president and more about his pro-life, pro-family policies.”

“For by grace are ye saved through faith; and that not of yourselves: it is the gift of God: Not of works, lest any man should boast.” — Ephesians 2:8-9